Meet Ymani Vargas, a senior at St. Hubert Catholic High School for Girls whose hobbies include, “Art, I guess!” she adds with a laugh when asked to describe herself. 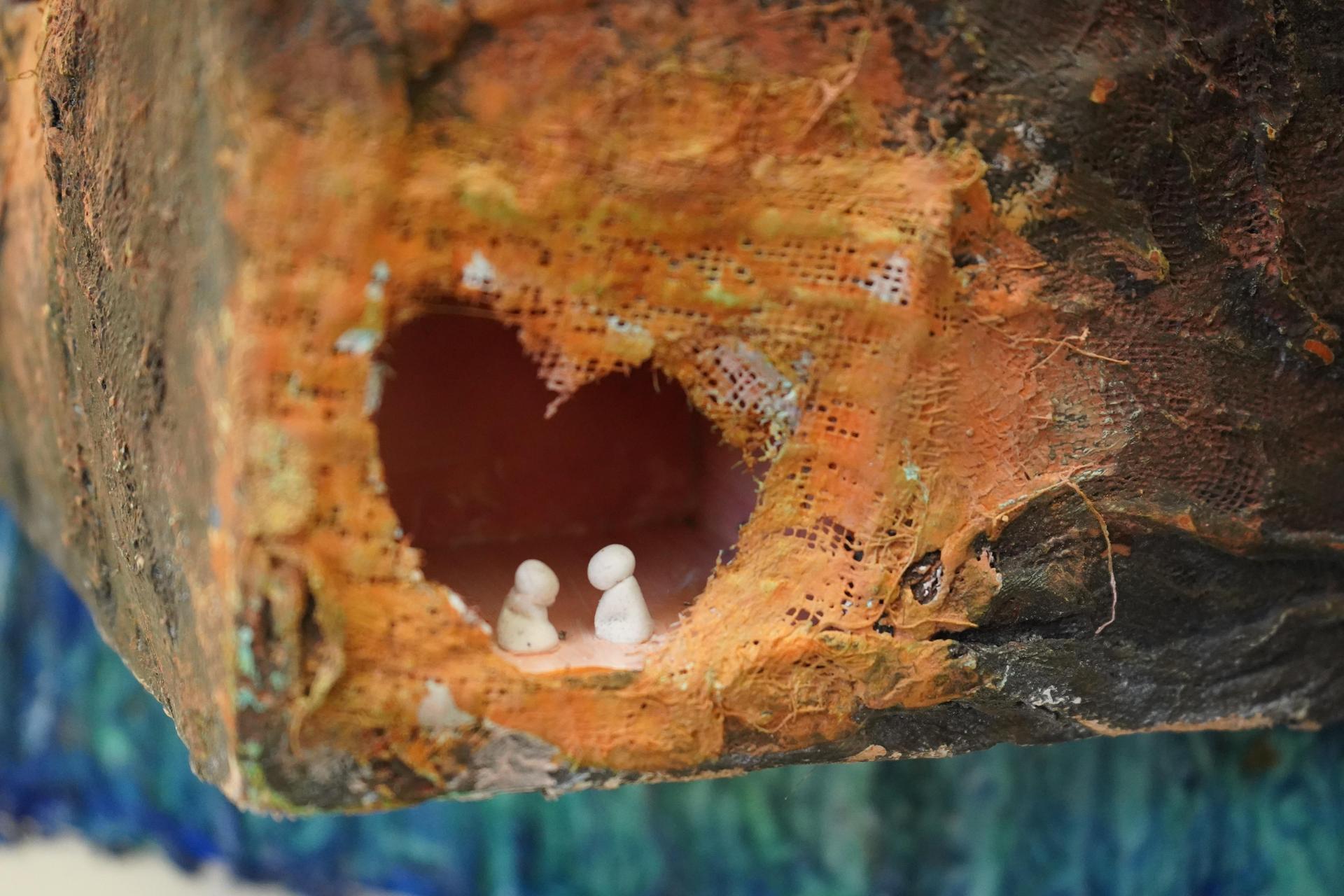 The college application process for Ymani was no easy task, as her fellow seniors can attest to, but her process was slightly different than the normal. Her goal for college is to attend an art school.

“Anxious, I was so anxious, and it was painful to wait,” Ymani says about submitting her portfolio to schools and waiting on the final decision. “When applying to an art college you feel like you are being judged, not just your work. Your art is who you are, so if you get rejected it feels like it was because my screenwriting wasn’t good enough, my music wasn’t good enough, my art wasn’t good enough. That makes the waiting period so much worse.” 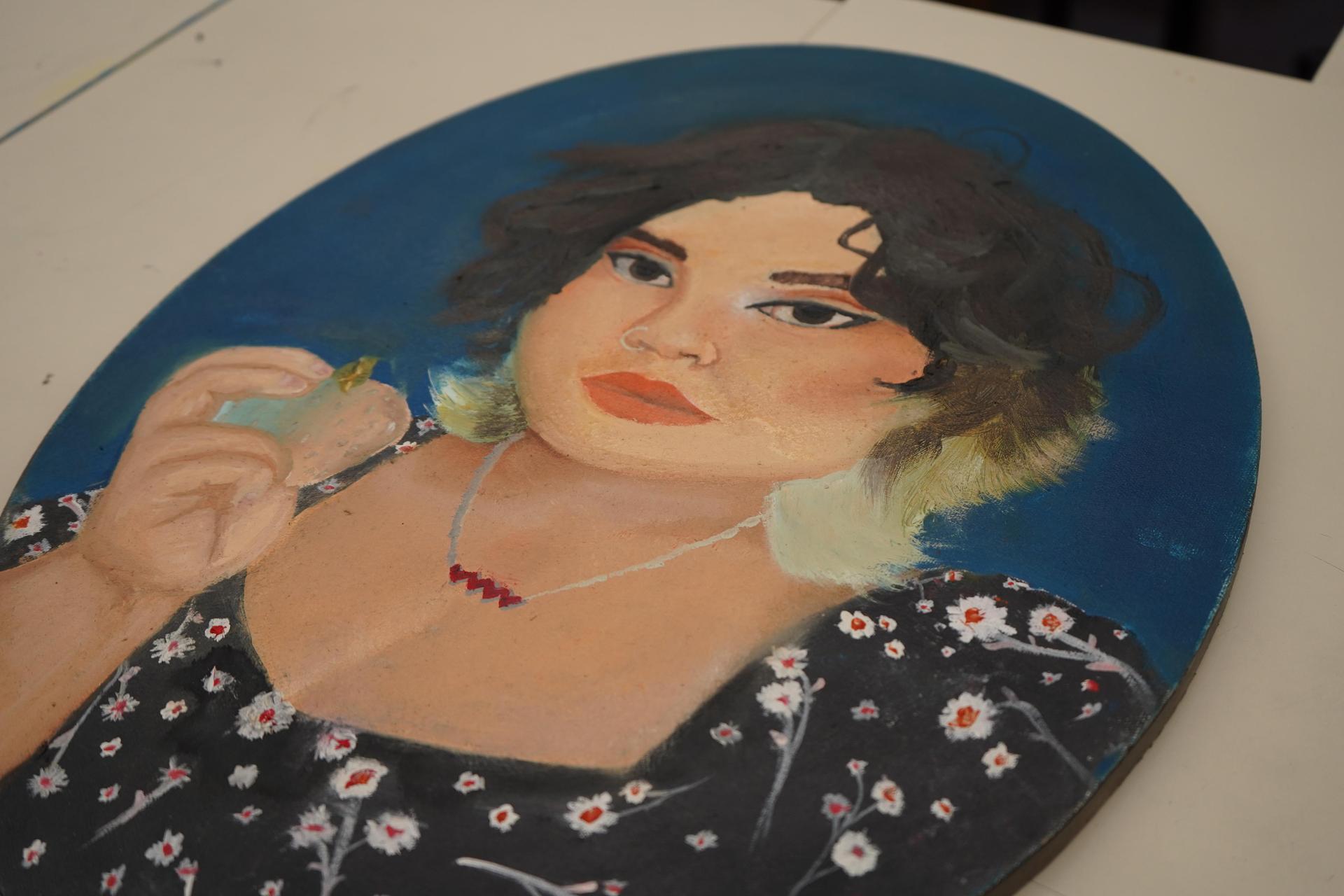 Over the past four years, Ymani’s journey with the arts has taken an unusual path. After taking no art courses in her freshman year, she chose to enroll in Art 1 as a sophomore. She had always had an interest in art, but never looked at it as something that could lead the rest of her life. That was until she met St. Hubert’s Art teacher, Ms. Cratin.

“I couldn’t give enough thanks for the art department, and Ms. Cratin specifically,” Ymani says, “When I got into Art 1 in sophomore year, Ms. Cratin was so encouraging and got me to realize that maybe art was something I could do with my life, which was so cool to hear!”

In junior year, she was without an art course again, choosing instead to enroll in a public speaking dual enrollment course with Neumann University, “I would stutter a lot when I get nervous and struggle with anxiety, so I really wanted to focus on bettering myself in that way.”

After improving her speaking skills, and moving into her final year at St. Hubert, Ymani returned to the arts, but she wanted to push for more than just Art 2.

“I went to Ms. Cratin and asked if I could be bumped to Art 3 or 4 instead. I showed her my portfolio with some of the things I had worked on while I was a junior in my free time. Not long after, I got an email during course selection letting me know that I had been accepted to AP!”

After seeing AP Studio Art on her class schedule for senior year, Ymani took it as a sign to pursue her dream and apply to art school. She credits the faith that Ms. Cratin had in her as what helped her to take that next step and believe that she could accomplish that goal. 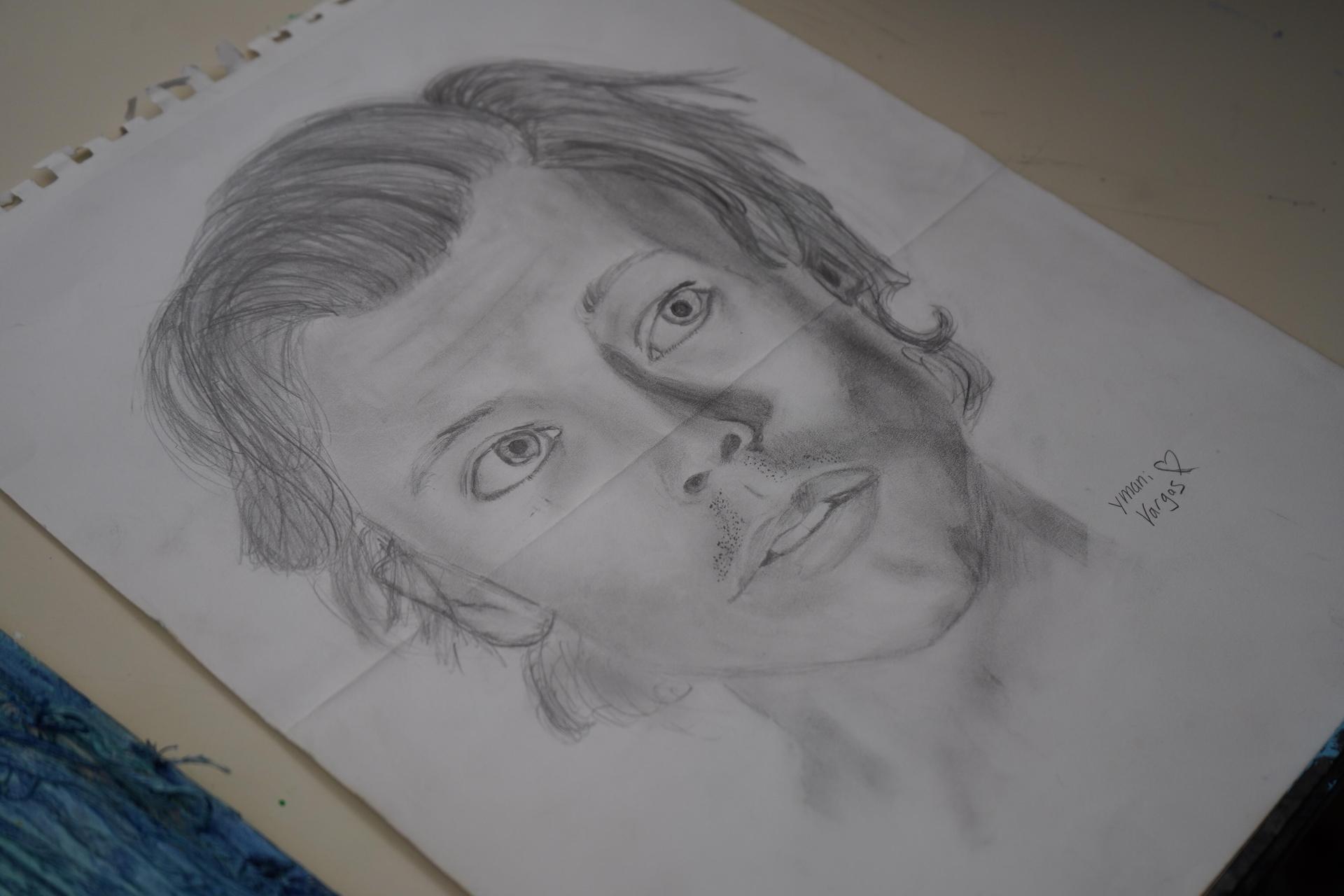 And it paid off.

“My acceptance story is one of those stories you see all the time, that makes the local news if someone manages to record it,” Ymani said with a smile. “My dad came home from work and saw the letter in the mail while I was at school, so he hid it. Later that night when I came home, he closed the door behind me and pulled it out of its hiding place. On the front of the envelope it read, ‘Congratulations’, so he handed it to me upside down. I was shaking because this was my dream school and I was already in tears because my mind went right to the negative.”

The dream school in question is the School of the Art Institute of Chicago, or SAIC for short. Regarded as one of the top art institutes in the country, it boasts an individualized curriculum that offers students the chance to hone their craft in their own way and in their own time. “You can focus on what you actually want to do there,” Ymani says, “They mold around you instead of you having to mold around them. I want that sense of independence, a chance to choose my own destiny.”

Staring down the letter from SAIC, she recalls her father and grandmother urging her to open it quicker. “I open it and pull out this big booklet and at the top it says, congratulations. I was already in tears, now I’m crying more. My grandmom is crying, everyone is so happy for me. I was so grateful that I got to experience that moment in that way.”

Besides SAIC, Ymani was also accepted to Ithaca College, University of the Arts, and Massachusetts School of Art and Design. But there is only one place for her, and that place is Chicago.

Before Ymani trades her brown jumper and Philadelphia classrooms for the city of Chicago and an art studio, she reflects on her time at St. Hubert and how it shaped her into who she is today.

“I know this is a cliché thing to say since ‘sisterhood’ is the school’s thing, but it's so weirdly true,” Ymani says when asked what she’ll miss the most about St. Hubert, “I know every single girl in my grade, and maybe I don’t know them closely but I can walk up to anyone and talk to them. After COVID we became really close, even with a lot of girls being new transfers this year. It was a rough year for all of us and we came out of it closer than ever.” 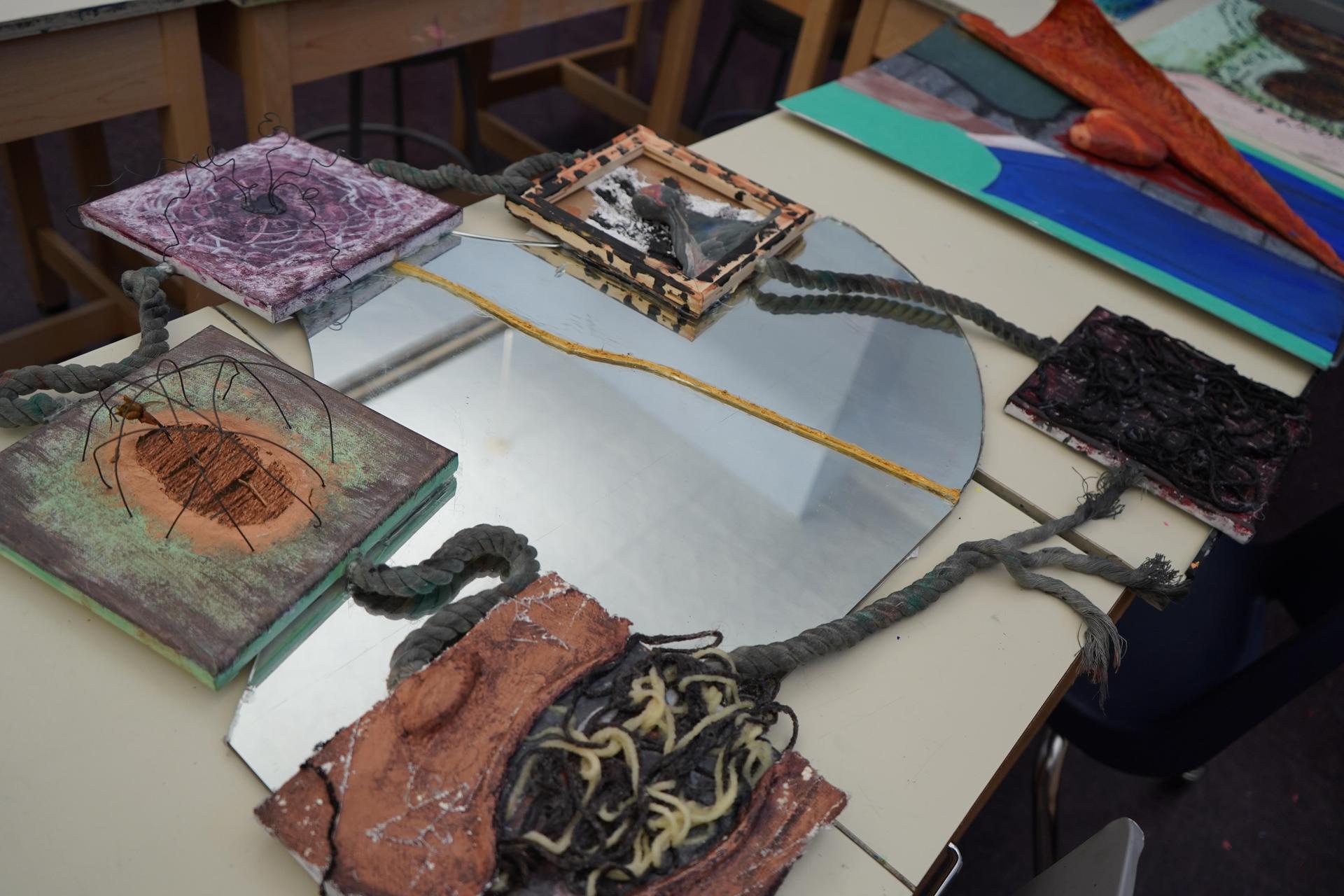 “I worry that in college it may not be like that,” she continues, “Everyone is coming from places all over the country and the world, and that sisterhood and companionship may not be as easy to find. I know that at St. Hubert I can join a club and not feel worried that I won’t fit in, because at the end of the day we don’t really care. It’s a nice feeling, we’re good at making each other feel loved.”

Speaking with Ymani, it was clear how strong her love is for her St. Hubert sisters. When visiting the art studio on the ground floor and the display case near the cafeteria, Ymani spoke first about the artwork of her classmates before getting to her own piece. She was able to describe the inspiration and the story behind projects that were not her own, going into detail about her classmates’ progress, how much she loved them, and how proud she was of them for what they created.

“She just finished writing her book,” Ymani says, pointing at a painting. “And this one is about struggling with an eating disorder,” she points to another. Watching Ymani light up for the successes of her sisters made her success just that much sweeter.

“My main goal is to become an art educator,” Ymani says about her future, “I like the idea of giving kids the opportunity that I was given, to tell them that they can do this. Art is very subjective, there is no objective way to say that art is this or is that. It feels like when you draw something sometimes that it doesn’t matter, but there is a lot of meaning in the things that we do and fostering that in a growing mind is important.”

“St. Hubert gave me that opportunity, and I want to give that to someone else. Ms. Cratin gave me the sense that I was worth something. I didn’t have the easiest childhood and being able to put those frustrations and self doubts into a piece of artwork and have Ms. Cratin tell me, ‘This is good, I can see where this came from,’ meant a lot to me. That is so important to a kid’s self confidence and if I could give that to someone else my life goals would be complete, because I want to make someone feel the way that she made me feel in her class.” 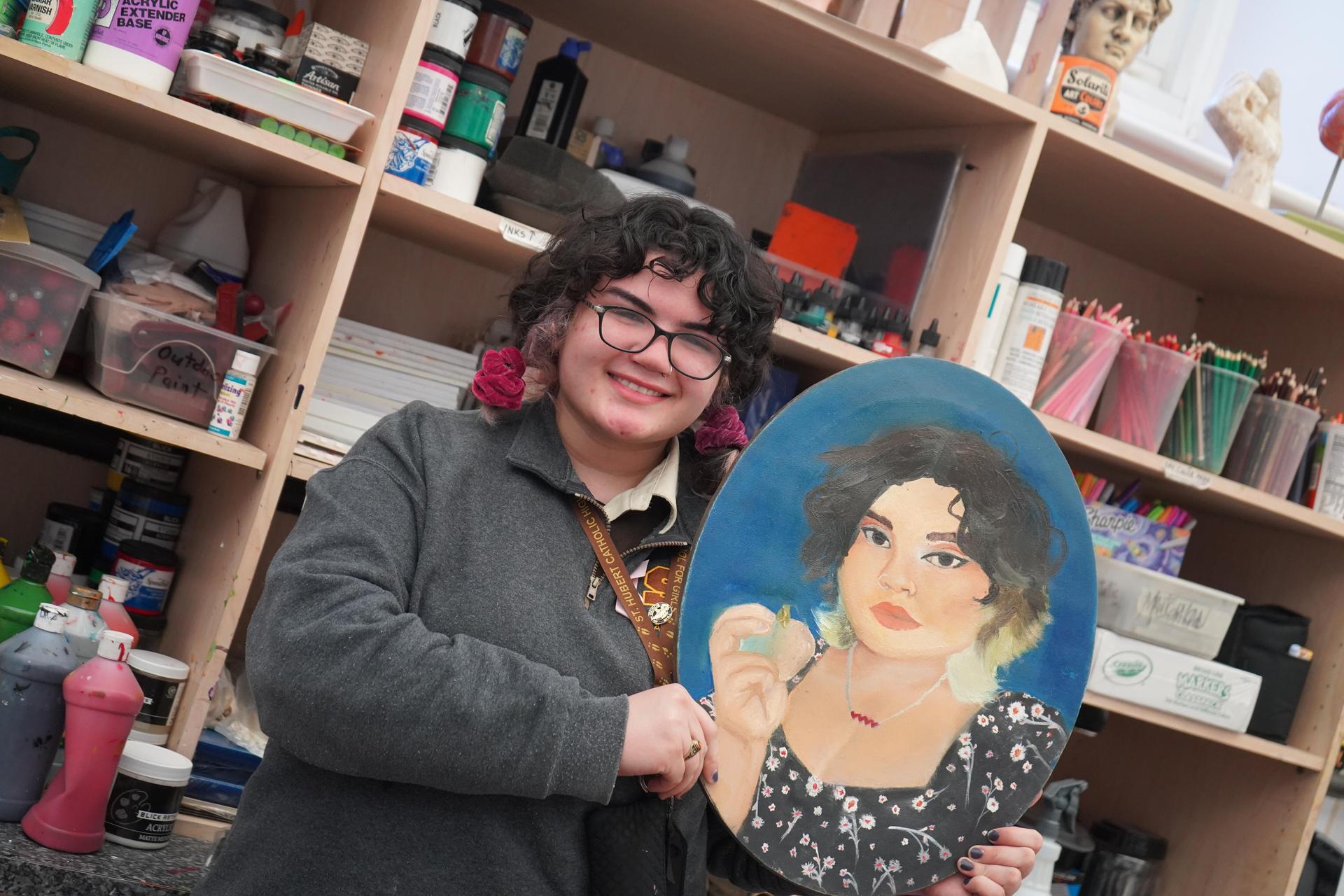